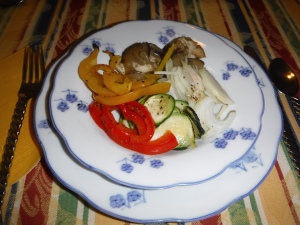 Here is detailed information on onions, including their health benefits; this is accompanied by an Italian baked vegetable dish, to go along with my last entry-Italian Braised Pork Chops w/ Tomato and Garlic Sauce-in which we explored much about garlic.

Onions, garlic, and leeks make up what is known as the onion family, which is in the genus Allium, a group of plants in the lily family, with its near 500 species-only about 20 of these are important human foods; onions are the species Allium cepa.  The name onion is derived from the Latin for “one”, “oneness”, “unity”.  Roman farmers gave this name to a variety of onion (cepa), which  grew singly, rather than forming multiple bulbs, as seen in garlic and shallots.  1

On the other hand, the word for green onions, scallion, is derived from Latin Ascalonia (caepa), or English “Ascalonian (onion)”, which is taken from Ascalo-Ascalon; this is the Hebrew name for a city in classical times in southwest Palestine, which is a port to this day in the Southern District of Israel.  Scallion refers to a young onion before the enlargement, or in some instances, to any of several similar onion plants, such as shallots or leeks.  2

Having originated in central Asia, the biennial plant onion has spread across the globe in hundreds of different varieties.  In the United States, there are two major categories of market onions, for here they are defined by season and harvesting practices, rather than by varieties.  Spring or short-day onions are planted as seedlings in the late fall, being harvested before full maturity in the spring and early summer.  These onions are relatively mild, moist, and perishable; thus, it is best to keep them in the refrigerator.  (This explains why it can be hard to buy onions right now that are firm, for often at this time of year they have soft, moist, and wrinkled skins; this requires throwing away several layers of the onion, when peeling them.)  3

The “sweet” onion is a special category of spring onion.  This is usually a standard yellow spring onion, which is grown in sulfur-poor soils, and therefore it has picked up half or less of the usual sulfur-containing defensive chemicals; the lack of these chemicals is what allows for a sweet or mild-rather than a strong-flavor.  For more on defensive chemicals in Alliums, see Italian Braised Pork Chops w/ Tomato and Garlic Sauce.  4

The storage onion is the second major category of onions on the market in America, which is grown in the summer and harvested when mature in the fall.  It is rich in sulfur compounds and drier; it can be easily stored in cool conditions for several months.  During fall and early winter seasons, onions on the market have a firm flesh, under tight skins.  5

White, yellow, red, and green onions are available in any store.  White onion varieties are somewhat moister; thus, they do not keep quite as well as yellow onions-phenolic flavonoid compounds give the color to yellow onions.  On the other hand, red onions receive their color from water-soluble anthocyanins, but these only on the surface layers of each leaf scale; cooking dilutes and dulls this color.  6  It is believed that these anthocyanins in red onions may protect against heart disease, certain cancers, and diabetes.  7

Finally, scallions-green onions-can be either bulb-forming varieties that are harvested quite young, or special varieties that never form bulbs.  8  Boiler and Hawaiian onions (a sweet onion grown in Hawaii) are among other common varieties on the market.

Cipollini onions are a variety of flat, mild, sweet, pale onions, which are the size of a golf ball.  9  These are sometimes available, at high prices, in the organic section at our local Fred Meyers.

Here are a few highlights of the presence of onions throughout world history: scribes in the early Sumerian civilization-the first people in history to have a coherent system of writing-recorded that they were growing onions in 2400 B.C.  Peasants in ancient Egypt had onions as part of their standard fare, which probably also included ale and a common flatbread, ta, which was purchased from a stall in the village streets.  10

Onions were a common root crop, during the dark ages of the first millennium A.D., while a typical pre-medieval curry in India might have consisted of brinjal (aubergine) and a couple of onions or a handful of dal (lentils).  11

More glimpses of the use of onions in global history are the following: by Song times in early China, spring onions were a common extra to their bean curd soup and bowls of rice, throughout this country.  While during Classical times, the Scythians of Central Asia supplemented the products of their herds with onions, garlic, beans, and fish (tuna and sturgeon).  Also, Scandinavians were drying onions for use during their extreme winters, from the early medieval period throughout most of the second millennium.  12

Finally, an 18th century English governess commented on the ailments of Russian serfs: “…they need not lay by much to provide for Food; for they can make an hearty Meal on a Piece of black sour Bread, some Salt, an Onion, or Garlick.”  13

Onions have long been a fundamental staple throughout the world; all this time they have been contributing to the health of the consumer.  healthline.com/nutrition/onion-benefits states that onions have been used to treat headaches, heart disease, and mouth sores since ancient times.  This low-calorie vegetable is rich in nutrients, such as vitamin C, which among other things acts as an antioxidant.  These antioxidants and compounds found in onions may reduce cholesterol levels, decrease triglycerides and fight inflammation; all of which may benefit our hearts.  (Their rich supply of antioxidants may also benefit those with diabetes and cancer.)  14

Onions are also rich in B vitamins, including folate (B9) and pyridoxine (B6)-important for regulating metabolism, producing red blood cells, and helping nerve function.  Also, among other things, onions boast of being a good source of much needed potassium; thus, they may aid in cellular function, fluid balance, nerve transmission, kidney function, and muscle-contraction.  15

The sulfur compounds and flavonoid antioxidants in onions are thought to provide cancer-fighting properties.  Multiple animal studies show that specific compounds found in onions, such as quercetin and sulfur compounds, may help to control diabetes.  There is some evidence that consumption of onions may boost bone density and digestive health, and they may have many antibacterial properties as well.  16

When facing a problem, we may feel a need to peel away its layers, like that of an onion-as the old proverb goes.  At initial contact, such situations can appear overwhelming, beyond our ability to resolve-too many layers!

Of ourselves, it is hard to make our wills and actions be of one accord, in dealing with troubles, while under pressure.  Thus, we may react rather than respond, and this only makes matters worse.

Jesus promises, however, to succor us from falling prey to temptations-to do things in our own strength-thus creating havoc.  His word tells us that he was 100% God, who became 100% man as well, and this was in order, to save men:

“Wherefore in all things it behoved him to be made like unto his brethren, that he might be a merciful and faithful high priest in things pertaining to God, to make reconciliation for the sins of the people.  For in that he himself hath suffered being tempted, he is able to succor (help, aid) them that are tempted.”  17

It is beneficial to approach this process of resolving problems and overcoming temptations, with a sense of confidence in Jesus, by not allowing our disrupting ‘feelings’ to settle in our minds.  When we hold fast the confidence and the rejoicing of hope, Christ sees us through every time.

Enjoy below this simple recipe for Italian baked vegetables, replete with onions! 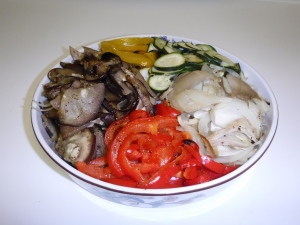 Verdure al Forno  (Baked Assorted Vegetables)  Yields: 8-10 servings.  Active prep time: 30 min/ baking time: 30 min.  This receipt-adapted from the Denver Art Museum Cook Book-originally came to me in the early 1980’s.  Note: this may be made ahead and reheated, or it may be served cool.

2/3 c plus 2 tbsp oil  (Avocado oil is preferable, as olive oil is carcinogenic when heated to high temperatures, though the latter is more authentic.)

Salt and pepper, to taste  (Himalayan, pink, or Real Salt are important for optimum health; an inexpensive fine grind Himalayan salt is available at Costco for $4.95 for five lbs.)