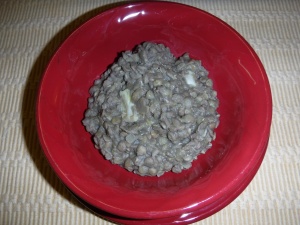 a dish of lentils

The staple of lentils is a blessing; here we look at the easiest way to prepare them, as well as details about their history, makeup, and health benefits.  This basic recipe, having only two ingredients, evolved due to recent inquiries for a simple means to cook lentils, for times such as now; this method of preparation brings out flavor and nutrition.

Lentils, Lens culinaris, are probably the oldest cultivated legume; they are mentioned several times in the Old Testament, with the first time being in Genesis, when Esau sold his birthright to Jacob for a “pottage of lentiles”.  Encyclopedia Britannica surmises that the lentils Jacob prepared were probably red Egyptian lentils. 1

Lentils are native to Southwest Asia; they are now a common food throughout Europe, Asia, and North Africa, with their greatest production being in India and Turkey (Canada is a distant third).  2

In North America, lentils are produced in the Pacific Northwest, eastern Washington, northern Idaho, and up into western Canada.  Since the 1930’s, they have been grown as a rotation crop with wheat, with most of the lentils being exported, though in recent times, Americans are consuming them more.  3

Their shape inspired the 17th century coinage of the word “lens”-the Latin word for lentil-which describes the lentil-shaped, double convex, piece of glass.  4

Two Groups of Lentils: Their Colors and Composition

There are two groups of lentils: the most common being the varieties with flat and large seeds-5 mm or more across. The second group consists of varieties with small, more rounded seeds that are finer-textured; included in this latter group are the prized green French lentille du Puy, the black beluga, and the green Spanish pardina.  The seed coats of these varieties may be brown, red, black, and green; most have yellow cotyledons, though some are green or red.  Both cooking and age can turn green seed coats brown.  The composition of dry lentils is 14% water, 25% protein, 60% carbohydrate, and 1% oil.  5

Some hold that lentils protect against heart disease, dementia, cancer, and other chronic illnesses.  6

They also prove to be a good source of protein, vitamin B, iron, phosphorus, and dietary fiber, but they can cause gas.  7

How Intestinal Gas is Created

What to do with the problem of flatulence, for which legumes are known?   Note: lentils seemingly cause little gas for some, while soy, navy, and lima beans are the worst offenders.  8

Our intestines produce about a quart of a mixture of gases a day, due to the growth and metabolism of our resident bacteria.  Many legumes cause a sudden increase in this bacterial activity-bringing about gas production-a few hours after they are consumed.  This is due to their containing large amounts of short-chained carbohydrates, which human digestive enzymes cannot convert into  sugars that can be absorbed; thus, these carbohydrates leave the upper small intestine unchanged.  When they reach the lower intestine, they are fermented; the resident bacteria population performs its job; gas results.  9

Of the two proposed remedies to help prevent gas, the long cooking of legumes is better than that of leaching off these carbohydrates with water (boiling the legumes briefly, letting them stand in this water for an hour, and then discarding the water); this latter method does get rid of most of the water-soluble oligosaccharides, but it also removes significant amounts of water-soluble vitamins, minerals, simple sugars, and seed-coat pigments (in other words, it strips the food of nutrients, flavor, color, and antioxidants).  On the other hand, simple, prolonged cooking helps to eventually break down the oligosaccharides and the cell-wall cements into digestible single sugars; this is the method used in the lentil recipe below.  11

Garlic is used in this receipt.  It, however, is possible to replace this with onions, herbs, or other vegetables of your choice; feel free to experiment.  Finally, I like to add a splash of olive or sesame oil to my dish of hot lentils, for nutrition and flavor.

These unprecedented times are producing a shaking; those things-things made-that can be shaken will be removed, so only the unshakable and eternal will remain.  13

It appears in the natural that all is slowed down presently; underneath the surface, there, however, is a “quick cooking” of our lives going on, both publicly and personally.

This lentil legume is flat and thin, with a thin seed coat; thus, cooking water need only penetrate a millimeter or two from each side.  That makes for a quicker cooking process than with any other bean-30 to 45 minutes.

Covid-19 can produce two different results: it may be getting under our skin, frying us so to speak, or preferably it is producing a great softening of heart, which is slow and gentle.  For the latter to transpire, our “seed coat” requires a protective shield.  The word of God gives such provision, for it states:

“For God so loved the world, that he gave his only begotten Son, that whosoever believeth in him should not perish, but have everlasting life.  For God sent not his Son into the world to condemn the world; but that the world through him might be saved.”  14

We want the unprofitable within us to be shaken off, so only the pure and stable will remain.  With everything changing so rapidly, it is advantageous more than ever, to look to the eternal.

As boiling water softens lentils in less than an hour, we too have had deep change transpiring in short order, with this boiling of our beings.  May this be a time of victorious overcoming-a time of thinking and responding competently, with godly wisdom.  Thus, we make right decisions in all that challenges.

Relationship with Jesus provides this.  Bless you, my readers!  May the extremely simple recipe below help you. 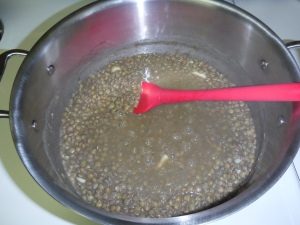 1 whole bulb of fresh garlic, cloves peeled and left whole  (May substitute 4 cubes frozen garlic from Trader Joe’s, or 3-4 tbsp garlic from a jar; instead of the garlic, may substitute an onion, herbs, or vegetables of your choice.)

Salt to taste, be sure to add only after lentils are cooked  (Himalayan, pink, or Real Salt are important for optimum health; an inexpensive, fine grind Himalayan salt is available at Costco.)

Optional: a splash of olive or sesame oil