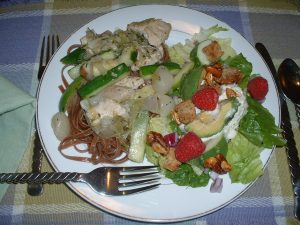 zucchini chicken with leeks and shallots

I am still developing recipes for zucchini.  My new creation is enhanced with the rich flavors of leeks and shallots, this week’s offerings at church from a faithful member’s garden; these are of the onion family, but very different from each other in appearance, flavor, origin…

Shallots are mainly of two varieties, which are usually reddish-brown, though sometimes purple; these roots are similar in looks to, but larger than, garlic cloves.  This plant’s flowers primarily bloom in white or violet.

Leeks are big in comparison, looking like huge green onions, with wide flat leaves.  They are best when their stalk formations-long, relatively hard, bundled sheaths-have grown to about 1 1/2 inches in diameter.  Ideally these should be fresh-not more than a week old-and stored in loose plastic bags in the refrigerator.

Shallots taste like a mixture of onions and garlic, though they are milder in flavor and more pungent; they bless exceedingly!  Our worthy leeks are even milder yet, with a mild pungency as well.

Shallots, which are European in origin, are especially associated with French cuisine.  Their roots/cloves can be eaten fresh, or cooked in butter; boiling is also possible.  They are usually sautéed whole; though, halving them is best when large.  Their sweetness is exceptionally delightful!

In the U.S., leeks grow primarily in the northern sections, due to the cooler climates, a requirement wherever they grow worldwide.  They, being so mild, should be simmered slowly, making them ideal for soups and stews; nevertheless, they may be sliced with a chiffonade-cut, as I describe in this recipe, and gently fried in butter, to augment the savor of special food combinations.  This Allium is low in calories and high in nutrients (such as vitamin K, manganese, copper, vitamin B6, folate, vitamin C, iron, vitamin A, fiber, magnesium, calcium, vitamin E, and omega-3 fats), making it a power-packed food.  For additional leek recipes and history go to Kale, Leeks, and Chicken and Leek Soup .

Arrowroot is my choice for thickening the unequaled juices, resulting from simmering these leeks and shallots.  It is a starch from certain plants of the genera Manihot, Curcuma, and Tacca, as well as the tropical American plant Maranta arundinacea.  Its name consequently materialized from our Native Americans use of this root to absorb poison from arrow wounds.  I decided upon it, because I was serving this meal to a diabetic friend: it adds only seven grams of carbohydrates to the entire six servings, which is about two percent of the daily requirement of this chemical compound for the whole recipe.  For these same health reasons, I also selected the diabetic friendly Ezekiel 4:9 Sprouted Grain Pasta.  Our repast was a grand success!

Arrowroot is gluten-free, with twice the thickening power of flour.  It makes smooth sauces, which have remarkable clarity.  Great importance lies in not boiling the liquids you add it to, as this will stop its action.  Unlike a roux made from flour, this thickens very quickly; it is comparable to cornstarch, but lighter and healthier.

The following entrée uses tantalizing rosemary and moist zucchini, of which we have abundance from our gardens right now.  Its accompanying sauce, with the prized leeks and shallots, causes this chicken dish to explode with exciting tastes.  Enjoy!

2 tbsp oil  (Coconut or avocado oil is recommended, as olive oil is carcinogenic when heated to high temperatures.)

Salt and fresh ground pepper  (Himalayan, pink, or Real Salt is critical for optimum health; a fine grind Himalayan salt is available for $4..99 for 5 lbs at Costco.)

1 tbsp arrowroot, dissolved in 1/4 c cold tap water  (May substitute cornstarch; arrowroot, however, is available inexpensively in bulk, at such upscale grocers as New Seasons; also accessible in spice section at local supermarkets.)