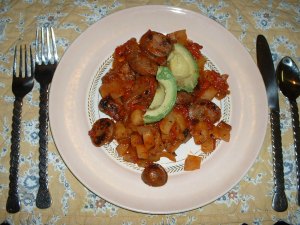 spicy sausage with tomatoes and turnips

Nothing pleases the palate as much as tomatoes fresh from the garden; how I love this time of year, as it explodes with their bounty.  Nevertheless, at times the question is what to do with them all.  When faced with this dilemma recently, I mixed this fruit with turnips and my favorite Aidells Spicy Mango with Jalapeno Chicken Sausages, both of which I had on hand; thus, this relatively quick and easy recipe evolved.  Enjoy.  (For another delicious Aidells sausage recipe, see Sausage with Zucchini and Eggplant .)

We think Italian cuisine, when tomatoes are mentioned, as we readily do with references to sweet and hot peppers, eggplant, potatoes, turkeys, and corn (in particular polenta).  None of these foods, however, were present as part of this country’s heritage, until after the discovery of America.  1

The tomato, Lycopersicon esculentum, along with its relatives the potato, chilli, and tobacco, are part of the nighingshade family; tomatoes were domesticated first in Mexico, long before Christopher Columbus’ arrival here.  2

In 1519, twenty-seven years after Columbus’ first voyage, this fruit was officially discovered in Mayan towns by Spanish adventurer Hernando Cortez.  In 1527, conquistadors brought it back to Spain, along with the avocado and papaya.  Nearly three decades hence, in 1554, an Italian chronicle listed the first identifiable description of this yellow cherry tomato as pomo d’oro (golden apple).  By the end of the 16th century, both red and yellow tomatoes were present in European gardens, but only as exotic ornamental plants.  There was a long period in which great suspicion was attached to them throughout this continent, due to their close resemblance to a deadly nightingshade.  Circumstances of the French Revolution, at the end of the 18th century, however, established them as an acceptable food.  3

Outside of America, Italy was first to heartily incorporate this fruit in its food preparation; inadvertently it became a leader in this adaptation.  The story unfolds with the French region Provence, whose cuisine was closely related to its Italian neighbor; these men from Provence formed the Marseillaise legion during the French Revolution.  Being richly exposed to Italian cooking, these soldiers had adopted the Italian “love apple”, as it was called, for it was considered an aphrodisiac.  In turn, this Marseillaise legion introduced this treasure to the Parisian troops, who took it back to their great city; thus, skepticism concerning tomatoes ceased in Paris.  Acceptance followed throughout Europe and subsequently the whole world.  4

The week after next, I will post a Spanish recipe Ropa Vieja, from a 19th century American cook book; this is an omelette using our prized tomatoes and leftover meat; it doesn’t get any simpler, but oh so taste-provoking!

12 oz Aidells Spicy Mango with Jalapeno Chicken Sausages  (May use any hot sausage of your choice, though this particular Aidells sausage is ideal; available at many supermarkets, including our local Winco and Fred Meyer-Kroger-stores.)

1 tsp salt  (Himalayan, pink, or Real Salt is critical for optimum health; a fine grind Himalayan salt is available at Costco for $4.95 for 5 lbs.) 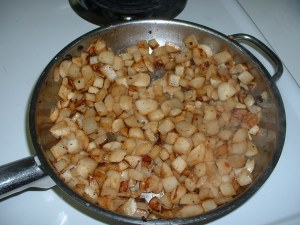 Avocado slices  (These are high in potassium and other powerful nutrients.)