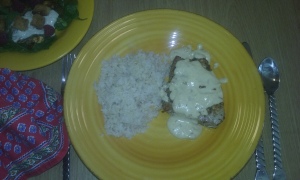 Wikipedia sites the Hawaii Seafood Buyers Guide as stating that the enormous yellowfin tuna (with its Hawaiian name ahi) is popular in raw seafood dishes, especially sashimi, as well as being excellent for grilling, where it is often prepared seared rare.  Its buyers recognize two grades, “sashimi grade” and “other”, with variations of quality in “other”.

In sushi and sashimi, yellowfin or ahi is becoming a replacement for the near commercially extinct southern bluefin tuna (Thunnus maccoyii); presently the latter is probably the most valuable and prized fish worldwide.

On September 11, 2013, smithsonian.com referred to Japanese chefs as revering this bluefin like the Italians might a white truffle or the French oenophile might a bottle of 1945 Bordeaux.  It goes on to state that its high standing, along with that of the other tuna species such as the yellowfin and bigeye, has not always been recognized in Japan, for in the 19th century it was called neko-malagi, meaning “fish that even a cat would disdain”.  Indeed, this beef-red fish is smelly and strong-tasting.

The wide-spread acceptance, of this once essentially worthless seafood, is actually a product of a marketing scheme of the Japanese airline industry.  The story starts with the tuna sport fishing craze prevalent in the 1940’s, 50’s, and 60’s, along the Atlantic coast of the U.S. and Canada; these 400-plus-pound bluefins were being caught for fun, weighed, and photographed; then, they were either sent to landfills, sold for pet food, or thrown back into the ocean dead.

With the dawn of the 1970’s, Japanese cargo planes brought electronics to America; these same planes took advantage of the cheap New England tuna carcasses for their return flights.  Not wanting to go back empty, they ingeniously purchased these dirt-cheap bluefins, which in turn produced profits of thousands of dollars each in their homeland.

What made this country welcome this previously detested fish?  (The Smithsonian article qualifies bluefin as being not so good, with a tangy iron flavor and a texture that melts in your mouth, which amateurs love; this is opposed to the crunchier, more subtly flavored muscles tissues of animals like squid, clams, various jacks, flounder, and sea bream, which are highly favored by traditional sushi connoisseurs.)  The reasoning behind today’s widespread acceptance of bluefin can be traced back to the newly acquired taste for beef in Japan’s diet in the 70’s.  Concurrent with the electronic boom, this national appreciation for strong flavored beef brought about their subsequent open-mindedness to the dark, red flesh of tuna as well.

When I moved to Tokyo in 1980, I experienced this red meat wave; hence in 1982, after my return home, I was inspired to seek the approval of Montana governor Ted Schwiden, for my becoming an “ambassador” to this Oriental country; my proposal was to sell the then popular Montana beef, with my historical Montana dinner, entertaining our state’s clients overseas (see “About” for more on this).

This advancing beef rage in the Orient set the stage for the universal acceptance of bluefin, for it prepared Japan’s taste buds for the inundation of this tuna by their airlines; in turn, this rich, dark fish’s popularity then spread back across the ocean to America; and “by the 1990’s, the bluefin tuna was wanted almost desperately world-wide”, according to the Smithsonian.

Now it is facing commercial extinction, with yellowfin or ahi taking its place.  As the magazine states, traditional sushi sophisticates, however, do not always appreciate bluefin; some even consider it junk fish, as it was once known.  Yet the general public perhaps foolishly values this tuna, in a way which is extremely opposite to that of the mid 20th century, when it was sent to landfills along the Atlantic coast.

In America, we love to grill ahi tuna, the frequent substitute for bluefin, as well as serving it raw.  This outstanding receipt, which is prepared in minutes, affords a mouth-watering lemon sauce to compliment this firm fish. 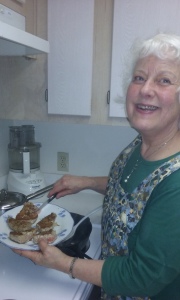 Ahi Tuna, Peppered with Lemon Sauce  Yields: 3 servings.  Total prep time: 30 min, or less.  Note: for an even quicker 10 min preparation, do step 5 only, omitting the lemon sauce, as well as all the ingredients, except the tuna, seasonings, and 2 tbsp oil.  On the other hand, you may double the sauce, allowing easy leftovers for next week’s Swift Pasta and Fresh Spinach with Lemon Sauce (1/8/18).

1-1.5 lb ahi tuna steaks  (Economical,  frozen, wild-caught ahi is often available in 1 lb bags at our local Grocery Outlet; may also use 3 fresh steaks, which tend to be 1.5” thick; these take longer to cook, weighing more.)

1 1/4 tsp salt  (Real Salt, Himalayan, or pink salt is so important for optimum health; a Himalayan salt is available very inexpensively, in bulk at our local Winco.)

2 tbsp oil  (Coconut or avocado is best for health, as olive oil is carcinogenic, when heated to high temperatures.)

1/2 c heavy whipping cream  (Must be heavy cream, or it will curdle.)

When I require a firm fish for creating recipes, I prefer ahi tuna over halibut, as the later tends to be drier.  I discovered in Culinary Artistry, by Andrew Dornenburg and Karen Page, that the excellence of tuna steaks is enhanced by both eggplant and black beans; lemon and garlic also compliment ahi.  It took courage for me to experiment with blending all the above together in a dish needed for a special occasion, during which I honored the Lomilos from Uganda.  1

Cooking takes risks, as life does; nothing comes automatically.  A patient, pressing-in is required to foster creative mastery.

I learned an important lesson in my early thirties when I moved to Portland, for then I was struggling to overcome an addiction to alcohol.  In the process of sobering up, I was taught to trust in the history of old-timers in areas that I didn’t yet have enough victory of my own.  As a result, I listened carefully to my elders’ testimonies, holding fast to their professed truths.  The pay-off was great, for I haven’t had a drink since 02/06/86.

In like manner, I have reached out to experts in the culinary field over the years; thus, amplifying my own inherent strengths.  The outcome is an acquired proficiency in successfully combining foods, as exemplified here.

I see parallels between skills gained in cooking and those procured in living.  Continuing with these teachings in my blog holds promise that ability, in both these areas, will be attained.

I can’t stress enough that patience and trust are essential elements, as we walk in the light each of us has, taking baby steps of courage to rise to our next level.

True to form, I sought help from experts in writing this recipe and its history.  For instance, I needed to know more about not overcooking tuna.  Harold McGee teaches about the meat-red-color of certain tunas in On Food and Cooking; it is caused by the oxygen-storing pigment myoglobin, which is needed for this fish’s nonstop, high-velocity life.  This deep red color is lost, if this fish is not frozen well below minus 22 degrees F, which helps explain the brownish color of some frozen tunas.  When cooked, it looses this blood red color at about the same temperature that beef does, between 140-160 degrees F.  2

It is best to under cook this food, or dryness will result.  If you like your meat rare, you will probably also like rare tuna; thus, be careful to check for color during its preparation.

Let’s humbly learn from the masters, purposing to keep all seeds of knowledge protected in fertile soil.

Eat hearty, this is a delicious fish! 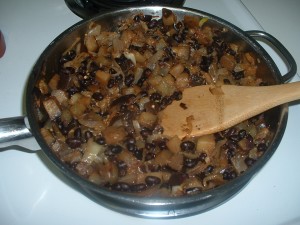 4 tsp salt, or to taste  (Himalayan, pink, or Real Salt is critical for optimum health; a fine grind Himalayan salt is available at Costco for $4.95 for 5 lbs.)

1-15 oz can of black beans  (Organic is best; Simple Truth brand at our local Fred Meyer’s is very economical.) 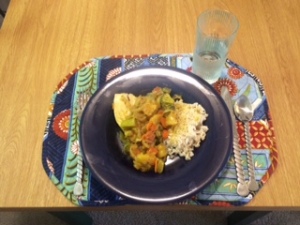 I had a fresh pineapple crying out to be used and a dinner guest about to arrive. This easy, outstanding dish resulted that tantalized my company. The sauce may be prepared ahead of time; you may cook the tuna just prior to serving it.

Nearly every person in my family (parents, siblings, nieces, and nephews) possesses this gift of developing imaginative, delicious recipes. Many are, or have been, professional chefs.  My brother Paul and sister Maureen were the backbone of inspiration behind my family’s restaurant high in the Rocky Mountains, at the east entrance to Glacier National Park in Montana.  This establishment belonged to my family for just over 50 years; it was famous in its day for its cherished food.  Paul and Maureen brought their polished innovations to our eatery.

My sister has taught me so much about cooking with optimum health benefits.   She is a master at creating beautiful foods that nourish body and soul.  I am so indebted to her for her nutritive excellence in my skills.

Intuitive wisdom about the preparation of ailments is in my family’s genes. It’s my fundamental inheritance:  I just know how to cook. My “formal” training in this endeavor is limited to one day, as a visitor, at Cordon Blue Cooking School in Paris, France.  The lesson was taught in French, of which I understood very little, but the dishes looked, smelled, and tasted glorious!  Note: I am the only one in my clan that applied higher education in food history to our joy of cooking.

1 1/2 tbsp oil  (Coconut or avocado oil is best, as olive oil is carcinogenic when heated to high temperatures.)

1-15 oz can of chicken, vegetable, or fish broth

salt and pepper to taste  (Himalayan, pink, or Real Salt is critical for optimum health; an inexpensive fine grind Himalayan salt is available at Costco.)

Brown rice, cooked according to directions on package