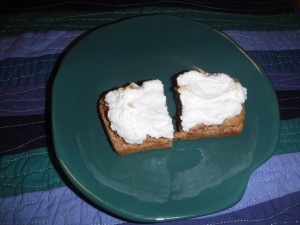 Here is the fascinating history of the making of ham, with the differences between traditional and modern day industrial processing, as well as an early American receipt for holiday leftovers of this meat.

The Beginnings of American Cook Books in 19th Century

Eliza Leslie devised the perfect solution for the remains of our Easter dinners, in Miss Leslie’s New Cookery Book (c. 1857), with her disguised ham recipe.  There she recommended baking, on toasted bread, seasoned ground ham-mixed with mustard and egg yolk-and crowning it with a golden meringue.  1

Leslie started her prolific career in 1828, with her humble Seventy-five Receipts for Pastry, Cakes, and Sweetmeats.  Her writing had developed greatly by the time she published the above cook book, with her disguised ham; now the New Cookery Book included a thousand recipes.  Her cook books evidenced that Leslie was following the lead of the influential Amelia Simmons in her writing of American recipes for an American audience.  2

Prior to the influence of Simmons, the heritage of our national cuisine can be attributed greatly to African American cooks on colonial plantations.  Here, due to great rivalry, the colonial dames jealously guarded their well-provisioned tables; thus, the great recipes of their Native African American cooks were strictly handed down by mouth from generation to generation.  All the cook books published this side of the Atlantic-there were only a few-were really English cook books, which were merely printed in the States.  3

Simmons changed all this, when she ushered in our nation’s writings on American cuisine, with American Cookery in 1796.  She introduced the publication of receipts using New World foods, such as cranberries, clams, shad, and terrapin, as well as cornmeal in puddings, corn cakes, etc.  She included Indian pudding, Indian slapjack (pancakes), and johnnycake or journey cake-called thus because these flat corn cakes were frequently carried on journeys.  4

Meanwhile, a number of American ladies followed Simmons’ lead with the writing of American recipes for an American audience; the most prolific of these writers was Eliza Leslie, from whom we have this inspiration for using leftover ham.

Back then, cured meats were made by either dry-salting (dry-curing) or brining (wet-curing) large cuts for several days, giving them about 60% moisture and 5-7% salt by weight.  This process preserved them and they could be kept uncooked for long periods without refrigeration.  5

Today salted meats-ham, bacon, corned beef-are still popular, because of their great taste, even though salting is no longer essential for preservation.  The curing process has gone from several days for traditional, wet-cured meats to just hours for their modern, industrial counterparts-in the case of some bacon-processing, the pork is cut into slices, immersed in brine for 10-15 minutes, and packed the same day.  With their milder cures, industrial meats generally must be refrigerated and/or cooked.  6

Now wet-cured hams are injected with brine.  The pork pieces are then “tumbled” in large rotating drums for a day to massage the brine evenly throughout the meat, making it supple.  Finally they are pressed into shape, partly or fully cooked, and are sold chilled, with no maturing period.  7

No Salt in Modern-day Corned Beef

Modern corned beef is also injected with brine, and actually doesn’t touch any salt grains, as its name indicates-corn comes from the English word for grains, which includes salt grains.  (For the detailed beginnings of corned beef, see The Best Corned Beef .)  8

Dry Curing Then and Now

With dry-curing, salt is used to transform pig into sublime hams, a process that goes back at least to classical times.  Among our modern versions of dry-cured ham are: Italian prosciutto di Parma, Spanish serrano, French Bayonne, and American country hams.  Though it is possible to cook these delicacies, which are comparable to long-aged cheese, they are best when eaten raw in paper-thin slices.  With a vivid, translucent rose color, their texture is silken and their flavor at once meaty and fruity.  9

In the process of dry-curing, the raw meat is cleaned, and then covered with salt, while being gradually pressed to draw out the blood.  (Specific herbs and spices may be added for flavor at this point.)  Next the hams are washed and hung to dry in a temperature-controlled atmosphere; finally, they are hung to air for a period of time.  This period may greatly vary: in the case of Serrano hams the time may be as little as 9 months, while 12 months are required for the Parma; the Iberian ham may take up to 2 years.  10

Though comparatively rare, dry-cured hams may use salt only in curing, such as with the Parma.  Most modern dry-cured ham, however, employs both salt and nitrites (either sodium nitrite or potassium nitrate), which prevents bacterial growth and gives the meat a desirable dark red color.  11

History of Nitrates and Nitrites in Curing

Potassium nitrate was first discovered in the Middle Ages; then, it was named saltpeter because it was found as a salt-like crystalline outgrowth on rocks.  Later in the 16th or 17th century, it was being used to brighten meat color and improve its safety and storage life, as well as enhance its flavor.  Around 1900, nitrite (a derivative of nitrate, due to chemical reactions during the curing process), began to replace saltpeter in the cure, except in traditional dry cured hams and bacons, where potassium nitrate has remained preferable.  Both nitrate and nitrite can react with other food components to form nitrosamines, which can be carcinogenic; thus, today we tend to read labels carefully to avoid both.  12

If you are celebrating this holiday with ham, utilize the historical Eliza Leslie’s disguised ham receipt for any leftovers.  Happy Resurrection Sunday! 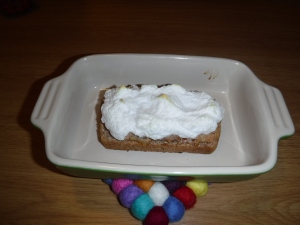 1/3 lb or 1 c ham, chopped to a coarse grind  (May use leftover baked ham or 8 slices of Trader Joe’s Uncured Black Forest Ham, which is nitrite-free.)

2 tsp of mustard, or to taste  (Trader’s Aioli Garlic Mustard Sauce is ideal.)

Salt and pepper to taste

4 lg eggs, 3 of them separated