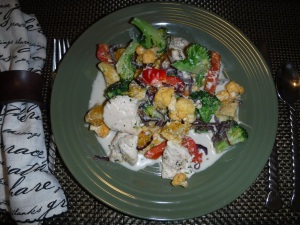 My delightful creation boasts of the meat and cream of coconut, contrasted with fresh orange, and melded with the juices of sautéed chicken and onions-flavors which accent each other, as Andrew Dornenburg and Karen Page suggest in Culinary Artistry.  1

Much can be said about the benefits of coconut, with its current widespread demand.  Coconut sugar-with its low glycemic index-is the best choice for baking (see Zucchini Bread, 2017/07/24), while coconut oil is ideal for health-learn more about this highly beneficial saturated fat in my entry Nutty Coconut Pie, 2017/11/13.  Here, however, we will explore the advantages of its milk, cream, and water.

Coconut is the largest and most important of all nuts, which is the stone of a drupe, the fruit of Coco nucifera, large tree-like palms, which are more closely related to grasses than other nut-trees.

These hardy fruits are borne and mature year-round; it takes eleven to twelve months for them to fully develop.  Around five to seven months, they develop coconut water (about 2% sugars) and a moist, delicate, gelatinous meat.  The mature coconut, however, has a less abundant, less sweet liquid, and meat that has become firm, fatty, and white.  2

Coconut milk-as opposed to coconut water-is made by pulverizing good, fresh coconut meat to form a thick paste, which consists of microscopic oil droplets and cell debris suspended in water; this water makes up about half of the paste’s volume.  Then more water is added, and it is strained to remove the solid particles.  Left to stand for an hour, a fat-rich cream layer separates from a thin-skim layer in the milk.  3

For a while, only the canned, skim coconut milk was available at Trader Joe’s.  When I inquired about their coconut cream, which I prefer for cooking, I was told the market was presently so glutted by the popularity of coconut products that the cream wasn’t being produced.  Lately, once again, cans of coconut cream are available there, much to my joy.

Recently friends came for dinner.  Cody was sharing his expertise with my computer, while I in turn was blessing with food; thus, the inspiration for this dish.  It was a win-win situation, for both of us were incapable of doing what the other was providing.

We are all critical members of the body.  With God’s help, we play out our individual parts, as we contribute to the whole.  Each of us is uniquely equipped; thus, the manifold splendor of the perfected body.  Likewise, this same divine genius can be seen in what mother-nature did, bestowing on us these many essential products from the coconut fruit. 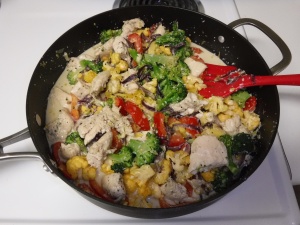 12 oz frozen broccoli  (Organic is best, available at Trader Joe’s; our local Grocery Outlet sometimes has it at a better price.)

Small head of cauliflower  (Organic, orange cauliflower is often available at our local Fred Meyer-Kroger-stores; color is beneficial to health.)

Red or orange bell pepper  (Organic is so important with bell peppers, as they readily absorb pesticides.)

1-15 oz can of coconut cream (Trader’s usually carries this; coconut skim milk will work as well.)