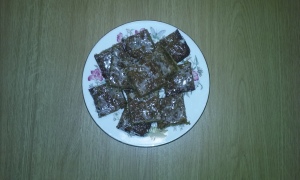 This recipe for nutty/lemon/coconut bars is from the mid-1960’s, given to me by my beautiful aunt Sheila.  She made them for her family, while living in East Glacier Park, Montana.

A decade later, after moving 90 miles away to Kalispell, this same aunt watched over me like a hen over her chick, as I was recovering from bulimia and anorexia then.  Having overcome much in her own life, she was willing to share her victories.  She approached her covering of me, as a humble friend, coming along side me gently. We spent numerous hours in each others company, usually over food, while we frequently perused the daily reading from her treasured God Calling, an inspired devotional written by two women in England.  How I recall our immense excitement over the accuracy, with which these prophetic, living words touched our souls!

Sheila loved good edibles.  From the seventies on, after her move to the city, however, her delight was to indulge in fine cuisine at restaurants, rather than spending the necessary preparatory time in a kitchen.  Her constant discovery of new establishments blessed us here in Portland, Oregon, where we both resided before she passed away in the 90’s.

Unlike my aunt, for me the height of indulgence in food is found in the strength imparted by the whole hands-on process, from the beginning to end stages, present in receiving nourishing substance.  This starts initially with the act of shopping, it intensifies as I press in over a stove, and it culminates in a grand finale as I partake of pleasures at the table.  For me, each level is essential in the mastery of the art of fine cuisine; likewise all require diligence in their practice,

For instance, shopping can bring joyful breakthrough, i.e., the hunting for specials at Fred Meyer recently benefited me greatly: the produce worker John and I were chatting, while he was doing his work and I was examining artichokes; he suddenly broke out excitedly, “I can teach you how to test this vegetable for freshness.”  He proceeded to show me how to squeeze its middle, instructing that if it flattens out it is past its prime.  Eagerly he promised that when watermelon season arrives, his expertise will be at its prime, for he never misses with this fruit-I can’t wait to share this tidbit with you also.

From the grocery store, I go to my kitchen, equipped with the best.  There I purpose to set my day’s thoughts aside, as I settle into cooking, striving for peace, which is critical, or mistakes get made, and our Father’s intended gratification is lost.

Julia Child comes to mind, with her passion for every aspect of fine food, especially her fervency in sharing her knowledge with the world; this can be seen clearly in her approach to helping young, aspiring chefs.  As with so many others, I was taken under her wings, with five encouraging letters in the 80’s and 90’s.  Her covering was a gift from God, who longs to envelop us with such protective shelter, as he did for me with my aunt in earlier years.  Indeed, I have become who I am today, by humbly receiving such guidance from authorities.

Sheila’s nutty coconut bars satisfy the child within, with their lemon savor; it’s my joy to share these with you.  Bon appetit! 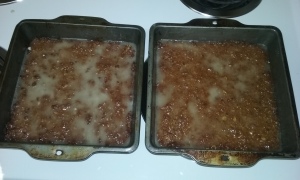 1 c unsweetened coconut shredded flakes (This is available in Bob’s Red Mill packages at most grocery stores, where it is also frequently sold in bulk.)

1 1/2 c powdered sugar  (Organic can be found at Costco and Trader’s.)

One thought on “Nutty/Lemon/Coconut Bars”