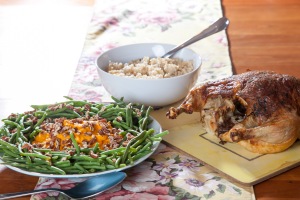 This three-part 19th century dinner, which started last week (see Chicken a l’Oignon and Lemon Meringues a la Ude), reflects the new Classic French cuisine.  This era in culinary history became popular as the Napoleonic age followed the French Revolution.  Then self-made men, following the example of Napoleon, rose in status and wealth.  They had to learn the ways of entertaining, or how to be amphitryons (hosts).

Cook books of the time reflected this non-aristocratic class’ needs, by giving such directions.  A forty-year lapse in the publication of cooking instructions, of any sort, existed prior to the beginning of this period.  One important recipe book, with the dawning of this new day, was Le Cuisinier, by A. Viard; it was published during the entire nineteenth century; its name, however, changed with each fresh political upheaval.

The book’s title changed to Le Cuisinier Royal, when Louis XVIII became king in 1814.  Other name conversions reflected the politics of the century: it became Le Cuisinier National, at the time Louis Napoleon was elected President of the Republic; then, it went back to employing “Imperial”, when this man declared himself Emperor Napoleon III in 1852.  The cook book was known by Le Cuisinier National once again, when France became a republic in 1871; it has remained such; thus, this recipe for buttered carrots, taken from these pages, dates back two centuries.

In 1964, Esther Aresty documented the history of European and American cuisine in her account The Delectable Past, from which I got my above information. Here she improved on this delicious recipe from Le Cuisinier by pureeing this vegetable in a food mill.  I have augmented her outstanding method with easy, modernized, 21st century steps, utilizing a food processor.

You’ll be immensely pleased with this memorable dish; a comfort food of all comfort foods!

1/2 tsp salt, or to taste  (Real Salt is best, available in health section of local supermarket.)

Butter or coconut spray  (Needed for oiling pan, if making ahead and refrigerating.)

One thought on “Carrots au Beurre”